“You’re not going to die, all right? So don’t listen to him. Just hang on until I can get you hooked up to the ship’s diag systems. You know that would have been much easier if you hadn’t tipped over the gurney.”
A somber laugh escaped him but turned into a cough.
“Sorry, but the plan was to avoid being shot. Obviously that didn’t pan out so well.”
“And he’s got a sense of humor even when he’s dying,” she muttered, shoving some medical supplies out of the way that had gotten knocked about during the scuffle.
“Thought you said I wasn’t going to die.” Funny, but the pain seemed to be fading, although his body felt heavy all of a sudden, his mind slow and tired.
“I’m the doctor, that’s what I’m supposed to say.” She finished shoving equipment out of her way and turned back to him.
For a moment, he focused on her gorgeously disheveled mop of dark hair and those soft green eyes. She really did have the face of an angel hiding the core of pure metium reinforced steel inside her. Right at that moment, she looked like an angel who’d been put through hell. A sheen filled her eyes, leaving her blinking rapidly. He grabbed her hand covered in his blood, leaving the grip slippery.
“You’re not actually upset over me, are you?” She speared him with a pissed-off, indignant glare. “Of course I’m upset! You don’t deserve to die just because Rian wanted his damn curiosity sated.”
His muscles rapidly weakening, he reached up with his other hand to cup her cheek. “I’m not worth it, Kira. I’m a commando; it’s the only end I had coming.”
She leaned down, tugging her hand free to press the cloth harder against his injury. Her other hand came up to grip his chin. “I am not letting you die.”
Warm vibrations erupted from deep within him, his inherent abilities fully blooming. She was right, he wasn’t going to die, but when he survived, Rian was going to have even more damned questions.
The truth would be much harder to conceal.
The low reverberations streaming through him reached the wound, taking away the pain and leaving him breathing easier. But it was getting harder to keep his eyes open. Just before he succumbed to the healing sleep, Kira’s eyes widened, her hand releasing his to lift and cover where he still had his palm against her cheek.
“What in the stars—?”

After his unusual reaction to a weapon, Commando Varean Donnelly is accused of being a shape-shifting alien and imprisoned onboard the Imojenna. Sure, he has abilities he keeps hidden from everyone—including the gorgeous doc examining him—because the government makes sure people as different as him disappear. For good.

Imojenna doctor Kira Sasaki knows there’s something different about the handsome commando the captain’s thrown in their brig. She doesn’t think he’s Reidar, although he might have been a victim of their cruel experiments. But when Kira learns the stubborn commando’s racial make-up, she finds herself torn between defending him to Captain Rian Sherron and his crew or urging Varean to escape while he still can. 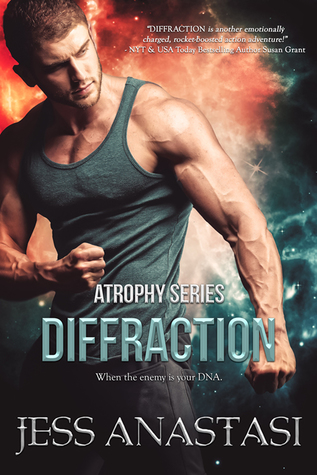 Check it out on Goodreads!
Buy your copy from Amazon, Barnes and Noble, Kobo or iBooks 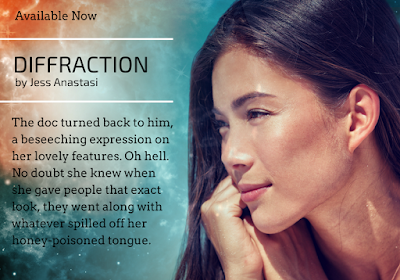 Author bio:
Jess has been making up stories ever since she can remember. Though her messy handwriting made it hard for anyone else to read them, she wasn’t deterred and now she gets to make up stories for a living. She loves loud music, a good book on a rainy day, and probably spends too much time watching too many TV shows. Jess lives in regional Victoria, Australia, with her very supportive husband, three daughters, two border collie dogs, and one cat who thinks he’s one of the kids.